The most oft-quoted Elizabeth Zimmerman phrase has been much on my mind during my knitting of the past almost-two-full-years – knitting that consisted entirely of the sweater that I just finished today, I should add – “Knit on, with confidence and hope, through all crises.”

I haven’t posted here (as I’m sure all three of you noticed) in that two year time frame. I had an entire post that I typed up purely for the catharsis of getting it out of my brain and down into words, but it will remain forever unpublished for a myriad of reasons I can’t get into here. Suffice it to say that the past two years of my life have contained more crises and upheaval than almost any other time of my life, and the stitches of this sweater were knit with very little confidence or hope.

I purchased the yarn for this sweater on a day when I was suffering more emotionally than at any other time except perhaps the death of my mother in February of 2002. (Sidebar: Why is it that everything terrible seems to happen in the darkest of winter? The purchase date for this yarn was also in February. Good thing my brother was born in that month, or I might consider it irredeemable.) I cast on that day in 2015, and whatever knitting I have done since has been on this sweater.

Separate of the emotional upheaval that prompted me to retail-therapy myself an entire sweater’s worth of yarn that day, was the idea for a version of the excellent Blue Sand Cardigan pattern that stole its stripes from the wool blankets of the Hudson Bay Company of Canada. While I’m not Canadian, my sister-in-law (and my brand new niece! Which, hi, I need to catch you up, I guess – I became an Auntie in August!) is; but my first affection for the Bay’s blankets sprang from the association I have to them as being fixtures on the beds at my maternal grandparents’ home on Griffith Lake in Delaware. So far as I know, Nana & Granddad got the blankets while in the UK for Granddad’s USAF assignment there working alongside the RAF – but regardless of where they got them, those blankets (and I think also several from the more-common-in-the-U.S. Pendleton company) lived on the twin beds in what amounted to a bunkhouse/guest space. I slept many summer nights and several Christmases’ worth beneath those blankets in some of the most family-centric, warm and cozy holidays I can recall in my life.

In any event, the stripe colors and pattern evoked exactly the sort of soothing comfort I felt sorely missing on the day I decided to knit this sweater, so that was the palette I went with when I hauled myself, shaking and still weepy, into Fibre Space in Old Town, Alexandria, determined to cast on and try somehow to make sense of the nonsensical. 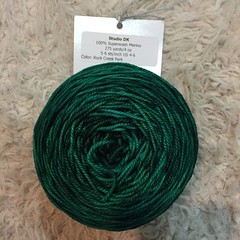 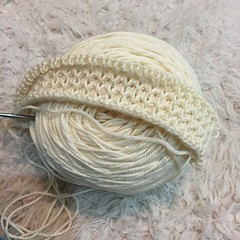 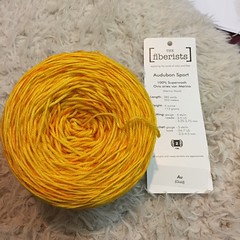 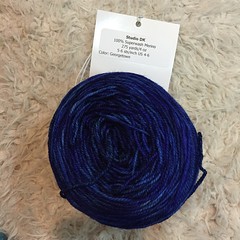 (Not shown: the red yarn, because I couldn’t get hold of that until later on, and now I can’t find the image I took of the skein. Oops.)

From the dawning of that particular crisis, the aftermath and aftershocks of which I have been dealing ever since, I knit. Some days, just getting out of bed was triumph enough, and knitting wasn’t on the agenda. Other days, knitting seemed the only thing I was capable of doing without completely fouling everything up. 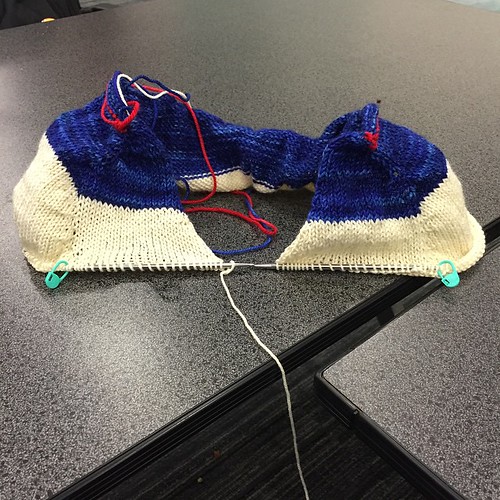 To a certain extent, it feels rather odd to be finished with this project after so long with it as my figurative and literal security blanket. It’s also a little bit scary, if you buy into the whole Like-Water-for-Chocolate idea that the emotions felt while crafting a thing are contained within the thing itself, because if so, this sweater should maybe be burned, just to protect people from the volume of misery wept into it. 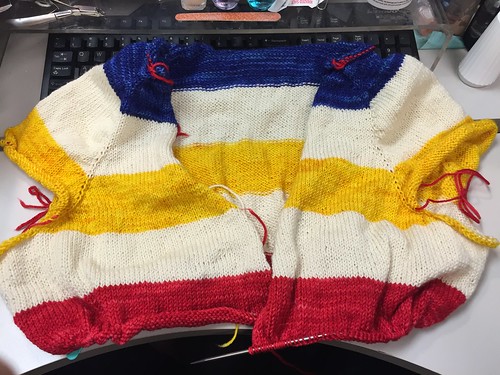 But either because of the time that has been spent, the progress that has been made within my life since it was begun, or just out of sheer cussedness, I DID put it on immediately after I cast off this afternoon – put it on, and wore it out to have dinner with my husband and daughter. No disaster yet befell us (unless you count the election, which I don’t), so I’m going to cautiously state that the sweater’s intent of comfort and security has outweighed the emotions of she who knit it as it came into being. Thus far, anyway. 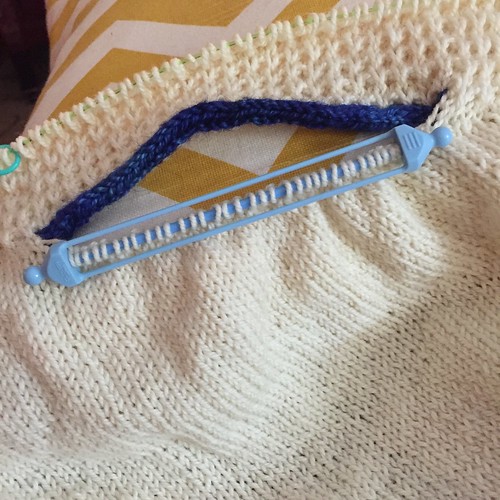 Can you spot below the error that The Wry Punster already knew was there without even having to see it? No, El, I didn’t fix it. I’m calling it a design feature, damnnit. 🙂 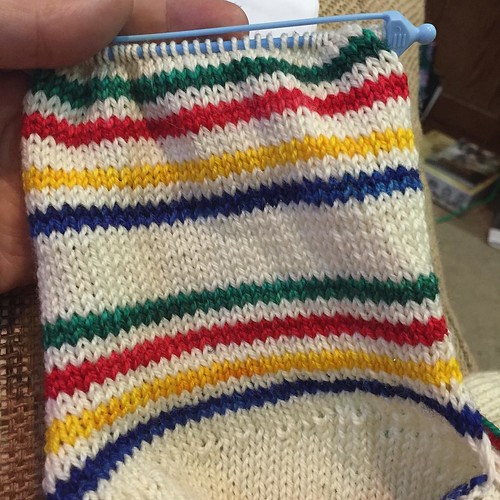 It’s a truth about crafting in general, and the needle arts in particular, that we are often as consumed by the process as we are the end result. Some people craft specifically because the process itself is the journey for them, rather than the thing reached at the end. Others have the end goal in mind as their only motivation for slogging through the journey in question. I don’t actually know for certain where I fall upon this spectrum, to be honest with you: I sometimes enjoy the process as much if not more than the end result, but there are other times when I want to skip past all the in-between bits to get to the payoff at the end. 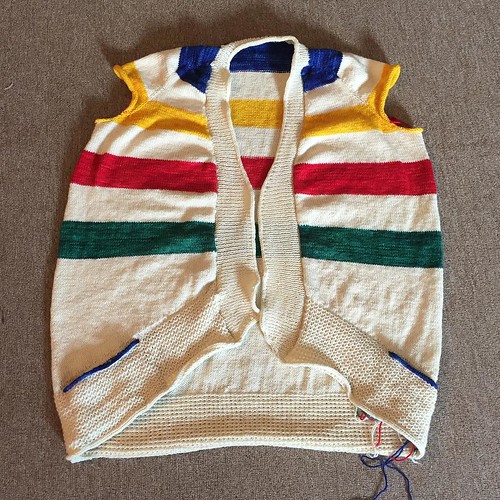 Life is not like that in most cases for me – everybody knows the ending of that one, if not the method of its (hah) execution, and I’m happy to drag out the process of knitting this life one very slow stitch at a time, thanks. But this section I’ve been in for the past few years, in which that process has been so very painful…(metaphorical) mistakes, frogging back, re-knitting, pattern changes, supply issues…that part, I do sort of wish I could mitigate, or at least skip through to get to the bit where it’s okay despite all that got you there. 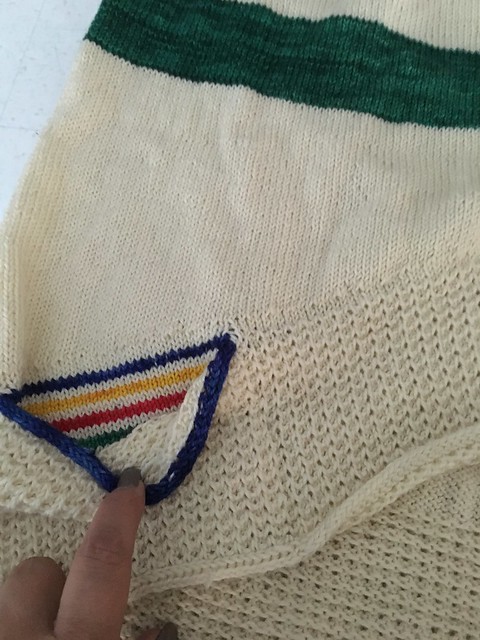 But instead of skipping through those sections, which is a skill I haven’t yet figured out how to cultivate, I’ve been (very slowly) knitting on, one stitch, one section, on stripe at a time – both literally AND metaphorically. I don’t know what the end of this particular project (metaphorically speaking) is going to look like yet, but it feels like finally, maybe, it may turn out okay. 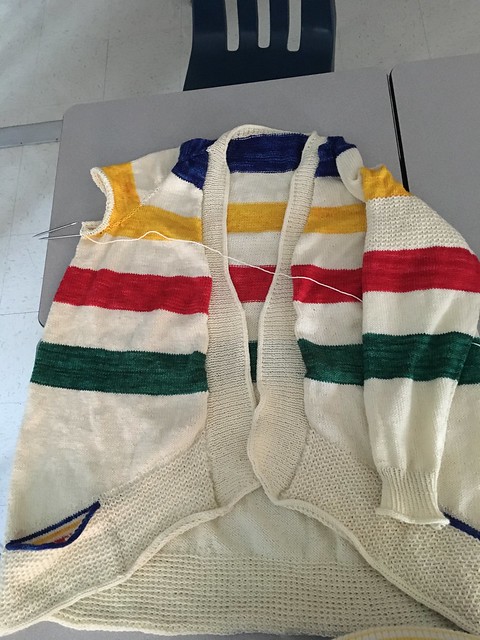 I’ve made mistakes; I’ve adjusted the pattern; I chose my colors to fit the shape I was given. I ripped out, re-knitted, did-over, and kept on, crafting, as best I could through everything that came, the shape of the garment I was after. Sometimes I was curled on the couch in the sun, and the knitting was warm and cozy in my lap. Others, everything was a mess, including me, but the shape of the sweater was still coming out basically the way I needed it to. 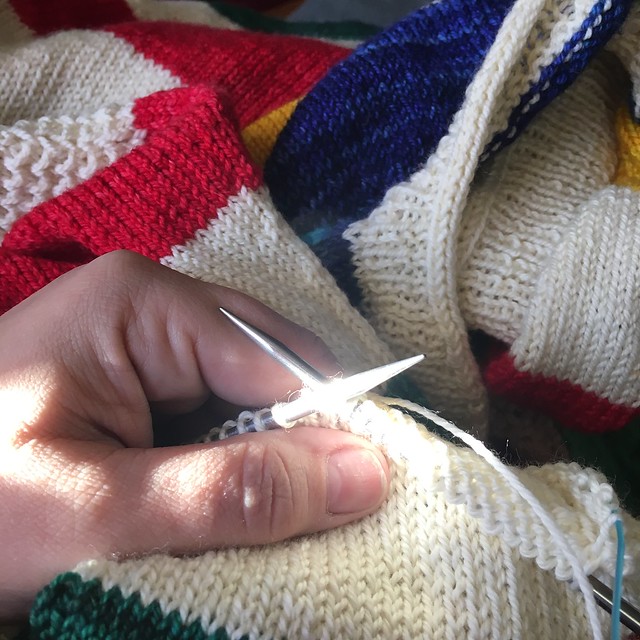 I don’t know how much true depth there is to this craft of ours – this one, or any other of the needlearts, really. I know that I come from a long line of women who have knit, stitched, sewn, quilted, and otherwise kept together the crazy yarns of their lives in garments they were able to wear with grace, if possibly not always pride.

For myself, I took EZ’s advice, and I knit on – if not always as proscribed, at least with determination and perserverance. My mirrors may be dirty, my surfaces cluttered – but when it got cold, I put on the sweater. 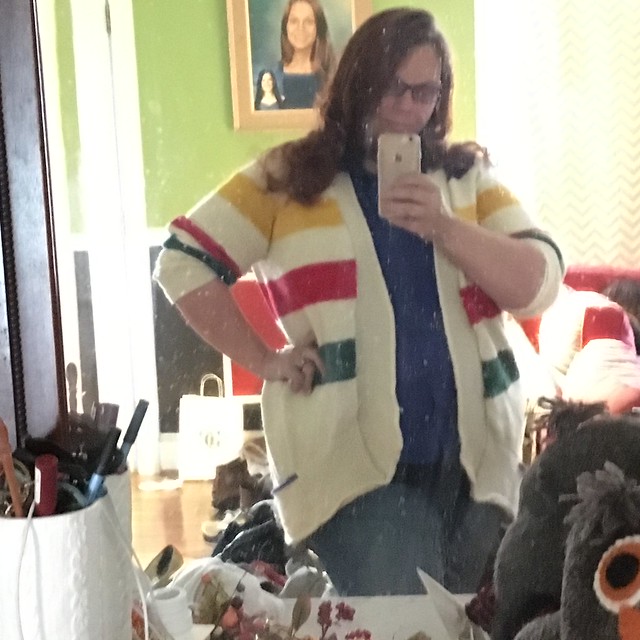 I’m told that that’s what it’s for. 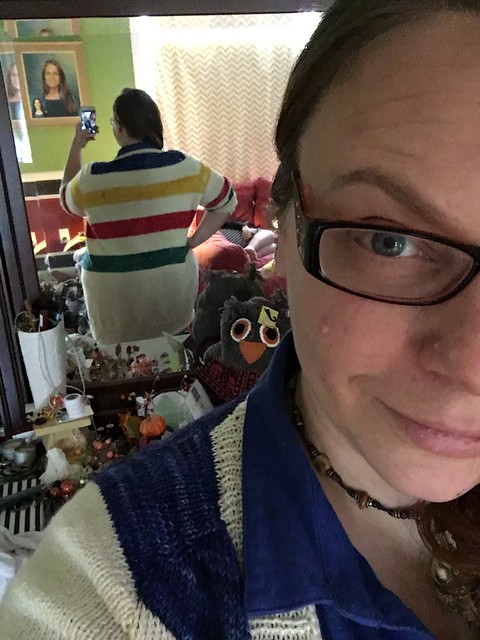